Israel continues to take steps to improve the quality of life of Palestinians living in Judea and Samaria (the West Bank), as well as in the Gaza Strip, and to encourage the development of these areas. The following is a periodic update, following up on the 22 July 2009 document on the subject:

Infrastructure materials allowed into the Gaza Strip
On 20 July, a special shipment of 17 trucks crossed into the Gaza Strip. These humanitarian aid trucks contained equipment needed for the operation of Gaza’s power station, including a unique engine that was returned after being repaired in Israel, as well as electric poles, cables and equipment needed by the Palestinian Energy Authority.

The trucks entered the Strip via the Kerem Shalom crossing under the coordination of the Gaza Coordination and Liaison Administration. 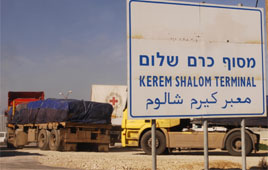 Extension of operating hours of border crossing to Jordan
Israel’s decision to extend the hours of operation of the Allenby Bridge border terminal with Jordan (as detailed in the previous report of 22 July) is due to be implemented this Wednesday, 5 August.

The crossing will be open from 8 a.m. until midnight for a trial period of 60 days, at which time the situation will be reevaluated. The new schedule has been coordinated with the Palestinian Authority as well as with Jordan.

The extension of the hours of operation is expected to increase the import and export of goods, which should boost the volume of commercial activity in the West Bank and improve the Palestinian population’s quality of life.

Hundreds of millions transferred to the PA and Gaza
Israel continued its monthly transfer of tax revenues to the Palestinian Authority. At the beginning of July, NIS 248,653,908 were transferred. This amount consists of the tax revenues after deductions for Palestinian debts for water and electricity supplies.

An additional NIS 100 million was transferred to the PA approximately 10 days ago. These funds also consisted of tax revenues that had been withheld previously by Israel, at the request of the Palestinians.

On 14 July, Israel facilitated the transfer of NIS 50 million in cash to the Gaza Strip. This money is to be used to pay Palestinian Authority salaries in the Strip.

Humanitarian aid shipments to the Gaza Strip
During the week 19-25 July, the following supplies were transferred to the Strip:
– 417 truckloads (9342 tons) of humanitarian aid were transferred to the Gaza Strip via the Kerem Shalom cargo terminal and the Karni conveyor belt.
Note: On 24 July, the terminal at Kerem Shalom was closed due to lack of demand for goods, indicating that there are no shortages of basic commodities.
– 2.109 million liters of heavy-duty diesel for the Gaza power station, and 1075 tons of gas for domestic use were delivered via the Nahal Oz fuel depot.
– Additionally, 343 Gaza residents entered Israel for medical and humanitarian reasons via the Erez Crossing.

International recognition of steps to improve Palestinian quality of life
During his meeting (27 July) with President Shimon Peres, US Special Envoy Senator George Mitchell praised the positive measures to improve the quality of live of the Palestinians in the West Bank, remarking that « meaningful action » has been taken by Israel.

During Quartet Envoy to the Middle East Tony Blair’s meeting (13 July) with Prime Minister Benjamin Netanyahu and Vice Premier Silvan Shalom, Mr. Blair noted that Israel was not receiving credit for its many recent measures to ease conditions for the Palestinian population in Judea and Samaria, such as the removal of roadblocks and checkpoints.